Who We Are  Faculty  Paul Phillips 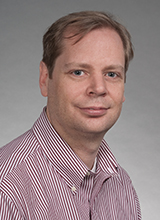 My lab’s focus is reward processing, how it differs under behavior phenotypes that are more vulnerable or resilient to mental illness and how it is changed by psychiatric pathology. Our primary focus is dopamine transmission and the circuits in which is participates.

We developed tools that allow us to track dopamine with sub-second resolution in animals over the course of months (Clark et al, Nat Methods, 2010). This approach allows us to study trajectories of precise neurochemical encoding of behaviors over the course of the development of symptomology and subsequent treatment in animal models of disease. We also have adapted this technology for intraoperative recording in humans (Kishida et al, PLoS One, 2011).

These approaches have attracted a large number of collaborations, including National Academy members Akil, Palmiter, Graybiel and Kandel.